DISCLAIMER - AS WITH ALL MY RACE REPORTS I FEEL THE NEED TO TELL YOU I AM A BACK OF THE PACK OVERWEIGHT TRIATHLETE WITH THE ONE AND ONLY GOAL TO FINISH.


I dropped off all my bags and bike with my buddy Fred on Wednesday night as I was taking the bus into NYC on Thursday morning because I was picked to be in the IRONMAN Full Circle Video and my interview was Thursday morning (Video posted in previous post).  After the interview I went to expo and checked in. Then took Ferry over to NJ where our hotel was.  Meet Fred over at the hotel and then went back to Expo with him.  Stayed over at the expo until the athlete dinner, then went back to NJ for the night.  Friday dropped bike at transition and just relaxed most of the day. Wife drove up on Friday and we checked into our room (I stayed with Fred and his wife the night before).  Went to dinner and everyone got a kick out of the fact that I ordered Jambalaya as my last meal before an IRONMAN.  Woke up at 3am day of race to get ready and catch the ferry. Wife was volunteering so she actually had to catch an earlier ferry than me.


Had to meet the Full Circle team off the ferry, they filmed me getting marked, kissing my wife (didn’t make the video).  And they filmed me checking out my bike race morning.  I pumped my tires up night before and was happy I did since it was crazy race morning.  With the logistics of this race there was no race day warm-up available but that being said I don't usually do much the day of the event to warm up.  Went to stand on line to be on one of the first ferries, I got on the second one.


Ferry ride was good talked to a guy to ease my nerves.  I ate a GU on the ride and drank a sports drink.  It took about 11 minutes for me to get in the water.  Got in and just started swimming.  Knew I was going fast (due to the current) but didn't realize just how fast I was going.  At one point I sighted and saw I was headed straight to a buoy but it was like 20 feet in front of me. I took two strokes and smashed right into it. Just kept swimming to T1.  Put my foot down and was in some pretty disgusting mud.  I thought I would come out of the water around 1:30:00 but finished at 55:27.


What would you do differently?


Not a thing, I will never swim that fast again. So if I am going to do another IM I can't expect to finish that fast.


I came out smiling from ear to ear.  One of the IRONMAN Full Circle guys saw me and said nice job, I thanked him. I ran to a wetsuit stripper who did his job.  Grabbed my bike bag and went into the changing tent. Took my time to make sure I did everything right. I knew with the swim time I could take some extra time to just settle down.  Came out of tent and got lotion-ed up from the lotion girls.  Ran to my bike and the IRONMAN Full Circle crew was there filming me get my bike.  Said a few words to them and got going.


I could have been quicker but I was happy with my time.


You get hit with a big hill right when you mount your bike.  I guess after about 2 miles or so you hit the Palisades Parkway.  Hills up and down, first loop was not that bad.  I think coming in was harder than going out.  I got a 4 minute penalty for pulling next to a guy and talking after the first loop.  No complaint I did the crime.  The 2nd loop was a lot harder even though I kept plugging away.  Coming back in with the hills and headwind had me really questioning if I was tough enough to finish.  I saw the Full Circle crew again as they filmed me on one of the up hills, said a few words to them again.  Sadly my longest training ride had only been 80 miles so I was pushing new limits after the turnaround.  Having the aide stations on the course was the best. I just kept telling myself just make it to the next aide station.  Came off the Palisades and knew I had only 2 miles of big down hills to go.  I was so excited to be done with the bike but more importantly off the bike at around 4:15 pm. To be honest as stupid as this sound’s the almost 8 hours went pretty quick.


Had to serve my 4 minute penalty in T2 since the penalty box was already shut down on the bike course. So basically just got to rest in T2.  This was actually cool as I got to talk to my wife and friends Lu and Mari while serving penalty.  They took many pictures while I was there.  Served penalty grabbed my t2 bag and took my time in changing tent.


Nothing, just making sure I got all I needed and didn't forget anything. Funny even with the 4 minute penalty it didn't feel like 16 minutes.


My training was 4 min run and 1 min walk. I actually started doing this, after the first big hill out of transition. But it didn't last long.  I couldn't keep up with the 4 min on the up hills.  So real early I went to mostly walking.  Walking fast but still walking.  I knew early on that I could walk the marathon and still be able to finish before midnight barring any physical injuries.  So although I could have ran more I pretty much shut it down.  I got the George Washington Bridge and did some running again (round mile 15-16).  Ran some more after the bridge because there was a nice crowd off the bridge. Then settled into walking fast again.  I was passing others that were walking and there were not many running at this point (remember back of the pack).  As I passed people I tried to encourage them to just keep moving forward and if they can do 20 minute miles they would finish.  For the last 6 miles or so I walked with a lady named Irene who was happy to have company and we both pushed each other to walk fast.  We plugged along and with about 1.25 miles to go I saw my uncle Dan walking towards us.  He and a friend were coming the opposite way hoping to catch up to me and encourage me.  My uncle is a former 2:45 marathoner so I think he was expecting to see me running.  His friend was with him and is an 11 time IM finisher and he let my uncle know not to bother trying to get me to run.  He knew I was pretty much done at this point.  I saw the finish line (after another hill) and gave my fuel belt to my uncle and ran for the last .25 miles or so through the finish line giving high 5 to the spectators still there.  The IRONMAN full circle cameras followed me for the last .10 of the run.  I got to see Mike Reilly at the finish. No sound system passed 10 pm but he did tell me I was an IRONMAN.


Again not weigh 252 pounds. But also not be afraid to push it a little early on the run.  I kind of knew I would finish so I was content to walk rather than push harder and run a little more.  My run pace wouldn't have been much more than my fast walk but I could have pushed a little harder.


Gave last interview to IRONMAN Full Circle and meet up with my friends and family. Gave them all hugs and thanked them for coming and waiting all that time for me.  Got some water and pizza in me.  Just took it all in for a little bit.  Then had to walk to ferry which took forever and went back to the hotel.  Next day made it back to NY for the expo and spent some money on finishing gear.

What limited your ability to perform faster:


Myself, I didn't train hard enough and didn't watch my diet enough.  My longest ride in training was 80 miles and my longest run was only 13.1 miles.  When I finished I said I would never do it again. Well 3 weeks later I don't feel that way any longer and think I will sign up for IRONMAN Wisconsin next year.


Logistically it was not a great place for a race.  Would have liked to have had my kids there but with my wife having to drag them around all day going on ferries back and forth would have been crazy.  But as my first IRONMAN it was spectacular. 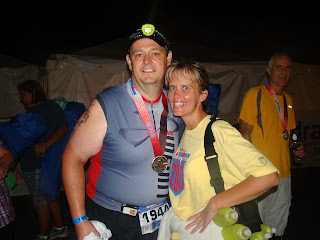 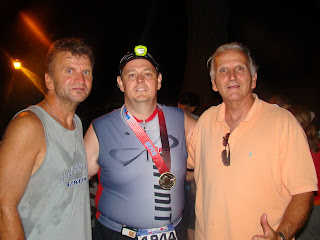 Uncle Dan, me, and Uncle Joe 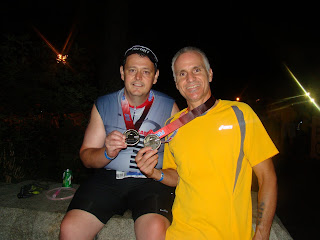 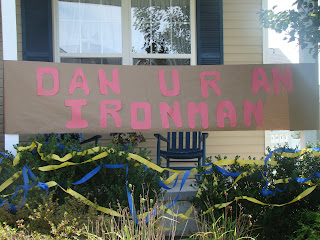 There are strippers and lotion girls? Ok, Dan, I'm in!

Seriously, though, an amazing accomplishment, Dan.

Great job and nice race report. Makes me want to be an Ironman too!

This is freaking amazing !!! Very impressed...

Saw your post on my blog and finally got to watch the Full Circle video with my wife (she did IM NYC too.)

It was a rough day to saw the least. Great recap! Cycling is my strongest discipline by a long shot, and I almost packed it in out there. The course was much harder than expected. Great job out there!

I think this is a very interesting thing.

This is freaking amazing !!! Very impressed
also can check this... Running shoes review

Dan Seifring aka "OBRATS"
Williamstown, NJ, United States
I am the luckiest man in the world. I have the most wonderful wife and 3 awesome kids. I owe my life to them...

Dan In The News

Some Links - It's all about me baby